Phone ban push for all schools

REBECCA URBAN for The Australian.

Schools across the country will come under mounting pressure to ban mobile phones in classrooms, with federal Education Minister Dan Tehan to raise the issue at ­tomorrow’s COAG education council meeting.

Mr Tehan, who has been pushing for schools to ban phones in a bid to curb cyber-bullying and classroom distractions, welcomed Victoria’s decision to ban mobile phones in primary and secondary schools from next year, urging other states and territories to follow.

Victoria yesterday became the first state to announce an outright ban on students using their mobile phones during school hours amid widespread concerns about their impact on student wellbeing. It follows a decision by NSW to introduce a ban for primary schools at the start of the year.

“When I talk to parents and teachers, the overwhelming ­majority want action on banning mobile phones in the classroom,” Mr Tehan said. “They see mobile phones as a distraction from learning and are also worried about cyber-bullying and other inappropriate usage.”

But critics have questioned the decision to apply the policy to secondary schools, given digital devices have become a key tool for many students’ learning. They also questioned the evidence supporting a blanket ban.

Catherine Mission, a former principal of Melbourne Girls Grammar School, called on the state government to release the research underpinning the ­“extraordinary step”.

“Let the profession debate its merit,” she said. “Robust digital citizenship programs educate, skill and empower secondary students — was that strategy on the table too?”

Association of State Secondary School Principals president Sue Bell backed the ban for primary students but not for secondary students. She said it was a shame the government planned to take away the right of individual schools to make decisions on promoting appropriate mobile phone use.

The Gonski Institute of Education’s Pasi Sahlberg said misuse of mobile technology was a societal issue, affecting adults as well as children, and was better handled in a collaborative manner. “The best policies are when schools trust students to be a part of the solution,” Professor Sahlberg said.

Victorian Education Minister James Merlino conceded the policy would not be “universally popular” but it was “the right thing to do”.

A review of mobile digital ­devices carried out by NSW last year noted a “lack of evidence” on the risks and benefits of various policies employed by secondary schools. It also noted that students were adept at getting around bans.

South Australia, which currently leaves the decision to principals, is closely monitoring the new arrangement in Victoria “to inform us on whether a blanket approach has advantages over local arrangements”. 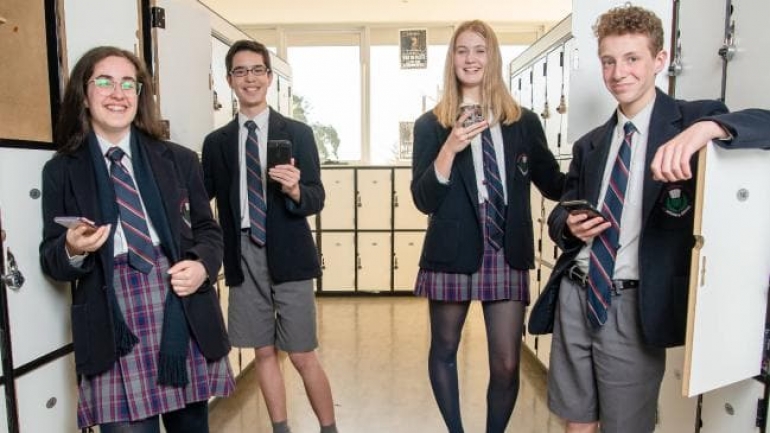