Leading educators, academics and teachers are sounding the alarm over the impact excessive screen time is having on Australian children's reading, writing and ability to concentrate in school.

A Four Corners investigation has found there are growing fears among education experts that screen time is contributing to a generation of skim readers with poor literacy, who may struggle to gain employment later in life as low-skilled jobs disappear.

By the age of 12 or 13, up to 30 per cent of Australian children's waking hours are spent in front of a screen, according to the Longitudinal Study of Australian Children.

Robyn Ewing, a Professor of Teacher Education at the University of Sydney, said this was having a tangible impact on vocabulary and literacy.

"Children who have been sat in front of a screen from a very early age start school with thousands and thousands of words less, vocabulary-wise, than those who have been meaningfully communicated with," Professor Ewing said.

Four Corners gained exclusive access to the initial results of a national survey of 1,000 teachers and principals conducted by the Gonski Institute.

The survey found excessive screen time had a profound impact on Australian school students over the past five years, making them more distracted and tired, and less ready to learn.

The Growing Up Digital Australia study has been described by its authors as a "call to action" on the excessive screen use "pervasively penetrating the classroom".

The study lead, Professor Pasi Sahlberg, said while teachers reported there were benefits to technology in the classroom, most also believed that technology was a huge distracting force in young people. 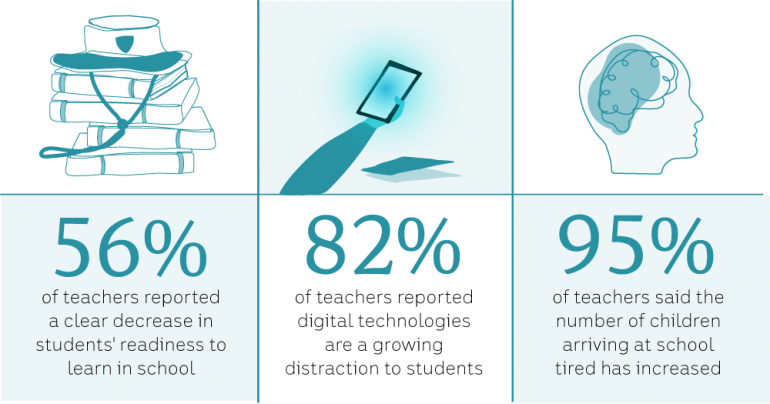 "Schools are feeling out of their depth in managing these issues and more must be done to support them," Professor Sahlberg said.

"About 90 per cent of teachers in Australia who have answered our survey believe that, compared to three to five years ago, the number of students in their own classrooms with psychological, social or behavioural difficulties and challenges has increased."

Veronica Sanders, a secondary teacher from Melbourne, has noticed more of her new year 7 students seem to struggle with literacy each year and she believes technology is a big part of the problem.

Ms Sanders notes that many children coming into the classroom today have had tech devices since infancy and were "handed an iPad when they were making noise as a young child".

"They're constantly consuming for entertainment. But they're not creating," she said.

"Vocabulary has definitely decreased and spelling is quite atrocious."

This has implications for how students are engaging in the classroom.

"They're no longer wanting to try, push risks and to put pen to paper as much. They're always passive, expecting the answer," Ms Sanders said.

Pete Goss, director of the School Education Program at the Grattan Institute, said writing standards among teenagers had been "steadily getting worse".

"The average student is working about 12 months below where they used to be a decade earlier," he said.

"We're flatlining as a nation," he said.

"We're not making the progress that we should be making and we need to redouble our efforts."

Tonight's Four Corners explores how schools are using different methods to catch those who are struggling or have switched off.

'With phones around, there is not time for books'

It was clear from secondary students Four Corners spoke to that while most of them liked to read books, many found it difficult.

They were concerned about the distraction of always having their heads in their phones. 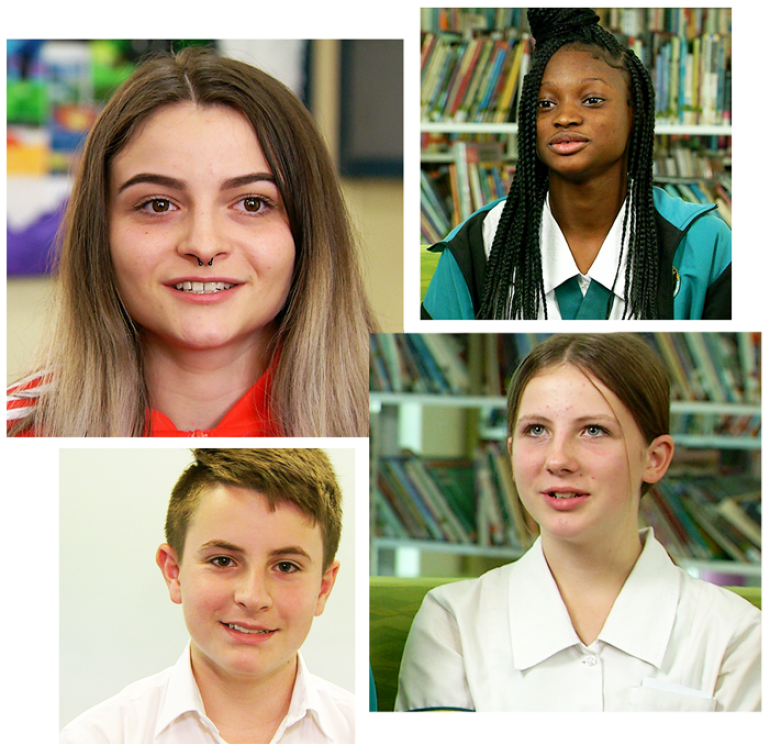 Grace, from Brisbane, said it took her much longer than it should to do her homework or to read a book.

"I might have a book that's really interesting … but maybe just hearing the buzz of a notification pop up, you just pick up your phone, you check it, you're like 'oh'," she said.

"Once you've clicked on it, you're gone."

Monika, also from Brisbane, said she spends six hours on her phone every night.

"I really need to stop doing it but it's really hard."

Mikhayla, from Melbourne, said while there was a joy in reading a book, "with phones around, it's like there is not time for books".

"I try to start reading a book, like at least every month or something," she said.

She is now in her final year of high school and hasn't finished a book since she was in year 7 or 8.

"After three, four pages, it kind of just stops and just goes back to social media life and that sort of thing," she said.

When asked if she knew a single person who read books, Melbourne student Shyane simply answered, "No".

But Jayden, from Sydney, disagreed that digital devices distracted students from reading or writing effectively.

"I'd just like to say that they are wrong," Jayden said.

'This is a real-time experiment'

"I think we all understand these tools are designed by people who want to keep our head in front of the screen," Mr Scott said, saying that was how they "make their money".

Mr Scott said part of the problem is educators are learning to use the technology at the same time as trying to train students.

"Part of the challenge for us as educators is that this is a real-time experiment that's been conducted on us all," he said.

Mr Tehan is calling for all states to follow Victoria and Western Australia, who from 2020 will introduce mandatory phone bans in state schools.

Mr Scott said while he did not believe phones belonged in classrooms and they were not allowed in primary schools in NSW, prohibition won't work in high schools.

A generation of 'skim readers'

Her research showed constantly moving between screens and trying to multitask was creating a new, and vastly different, "digital reading brain".

"We're left with a more short-circuited brain. The evidence from our eye movement researchers is that skimming is the new normal, and we're becoming browsers and word spotters," she said.

Professor Wolf is deeply concerned about the children who do not read books.

She said while multitasking and skim reading affects adults, the change is far more acute in young people who hardly read books in the first place.

"So it's one thing for us [adults] to have an insidious demise of deep reading processes, but we had them formed, and we can return to them," she said.

"Unless [children] are developing their background knowledge … the ability to think critically, and to have empathy for others and take on other perspectives … they will not know what they don't know."

Digital technology has transformed education. But it's a double-edged sword for literacy.

A good grasp of the English language is now more important to kids' futures than ever.

NAPLAN figures across Australia show that children whose literacy results were strong in year 3 stop making the same gains as they move through the latter years of primary school into high school.

Dr Goss said the pace of progress was slowing down between year 5 and year 7.

"Over this two-year period, students are making six months' less progress than they used to," he said.

About 20 per cent of year 9 students were below or just scraping through to make the national minimum standard.

Dr Goss and Mr Scott are both concerned about the impact of literacy on potential future employability of today's kids.

Fifty years ago, when 80 per cent of young people did not complete a high school certificate, a lack of "high-order skills" did not stop a school leaver from finding steady employment.

According to Mr Scott, "that era is now over".

Dr Goss said anyone entering today's jobs market would need strong reading and numeracy skills and to be "good at humanities or sciences".

"We're not delivering for everyone and that's a problem," he said.

Tips for parents from the Gonski Institute: