This article was written by Anna Patty for The Sydney Morning Herald on 16 April 2020. View the full article here.

Children are too often turning to Siri for answers to questions and becoming distracted with computer games at a time when the COVID-19 crisis has meant they need to be more immersed in digital learning than ever before.

In the first of a series of Growing Up Digital Australia reports, the Gonski Institute at the University of NSW has warned that digital technology has become a growing distraction from learning and that students are less able to focus on educational tasks.

“What is happening with our kids now is the biggest educational experiment in history,” says Professor Pasi Sahlberg, the report’s co-author. “As adults, we have much to learn about their habits, and the benefits and pitfalls of screen-based technologies for them." 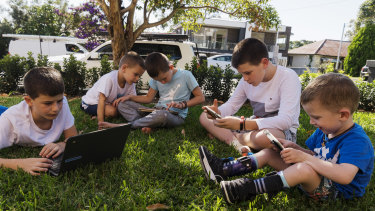 Sonia Giaouris, a mother of five young boys aged between 4 and 10, said she agreed with the report's findings that while digital technologies can enhance learning, they also have pitfalls.

She said her children were often distracted by computer games and unable to concentrate and "stay on task" while doing their school work on a computer. She said it was important for them to work things out like basic maths and telling the time for themselves instead of relying on Google.

"It is a great tool, but I don't think it is benefiting children when they say, 'Hey Siri, what time is it?'," she said.

Mrs Giaouris said she would not put a television in her children's bedroom or give them a computer tablet each to reduce their exposure to digital devices.

The Gonski Institute surveyed 1876 teachers, principals and school support staff from government, Catholic and Independent schools and found 59 per cent had observed a decline in students' readiness to learn.

One teacher said students were spending a large portion of the school day "thinking about games they play at home". Students had also expected every lesson to be exciting and showed little patience for "mundane" activities including handwriting.

The report found the vast majority of teachers were concerned about the more limited access disadvantaged children had to computers and the internet for learning.

Excessive screen use for many and had resulted in poor sleep which was likely to increase the risk of anxiety and depression. Teachers also identified an increase in children with emotional, social and behavioural challenges and a decrease in empathy over the past five years.

Professor Adrian Piccoli, director of the Gonski Institute, said he was surprised to find how tired and easily distracted children had become at school.

"It is about making sure that children are exposed to the right technology for the right amount of time at the right time - not six or 10 hours a day or at 3am," he said. "This points to the role of parents and the community in terms of what happens in education."

NSW Teachers Federation president Angelo Gavrielatos said the Gonski Institute report was timely in making its findings which have shed light on the social, psychological, emotional and educational impact on children using technologies for learning. He said teachers were also concerned about inequity in student access to technology needed for learning.

"Digital technologies are not the panacea that some people make them out to be," he said.

The NSW Government restricted the unapproved use of digital devices during class, recess and lunch at the start of the school year "to balance the benefits and possible harms to students when they are using digital devices".

Secondary schools have more flexibility "to balance the benefits and risks of technology in the way that best supports their students and prepares them for life beyond school".

A NSW Department of Education spokesman said the department had provided more than 4200 devices including computers, modems and internet services to students and schools had loaned extra devices.

"Many more deliveries will be taking place across the state at the start of Term 2," he said.

"The department is focused on getting resources to students in need as soon as possible with priority for Year 12 students and disadvantaged students in rural and remote schools."